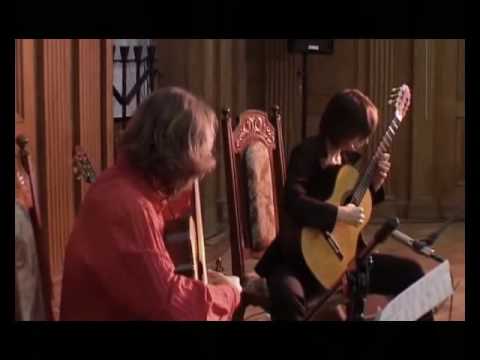 We’re very happy to have a new phenomenal player featured on our GSI YouTube Channel. Anna Pietrzak is a Polish guitarist and pedagogue who recently took a decisive step in her life and moved from Poland to Vancouver, Canada where currently she is starting a new life.

Anna and her husband, Carl Petersson, who is a renowned pianist, moved to Canada despite both having well-established careers in Europe. Both Anna and Carl were teachers at a conservatory of music in Wroclaw, Poland.

Music has always played a very important role in Anna’s life. Her mother, Danuta, was her first music teacher and always took care of her children’s musical development. Since an early age Anna played together in a duo with her brother, Łukasz. Together, they were perceived to be one of the best Polish guitar duets until Łukasz’s tragic death in 2009. Even today, ensemble music gives Anna the most joy and plays an important part in her professional career.

In the video below, you can listen to one of the final performances of Anna and her brother Łukasz, in 2007.

For over 20 years, Anna has also been working as a music teacher. Anna says that working with her students brings her motivation to constant self-improvement and teaches her humility and patience.

Anna and her brother, Łukasz

Throughout her career, she has played many concerts and has received many international awards. However, live performances with orchestras have always been the most exciting opportunities for Anna. She has performed live concerts for the Shanghai Radio, Polish Radio and played Tedesco’s Concerto in D, Op. 99 with the Toronto Concert Orchestra.

Anna likes guitars that are very responsive and provide a broad variety of colors. Having this direct influence on shaping the sound on guitar made her give up the piano and switch to guitar after the first six years of her music education as a child. She could never establish this close personal relationship with the piano. The size of this instrument and the coldness of the keyboard were not nearly as appealing to her as the warm silky sound of the guitar. However, she is married to a pianist!

Anna likes spruce instruments with elevated fretboards in high positions, just like her own guitar, Thomas Humphrey from 1998 (ex Costas Cotsiolis). When she learned that GSI had in stock a 1994 Thomas Humphrey “Millennium”, she decided to record the beautiful and intimate piece called “Reflection” by Jason Nett, a composition inspired by J.S. Bach’s Prelude in E major, BWV 1006a. For Roland Dyens’ arrangement of “Ile de Ré” by Claude Nougaro and Gérard Pontieux, Anna picked a 2001 Rafael Moreno Rodriguez “Sueno” (ex Celin Romero) which in her opinion was the most suitable for this jazz-like piece utilizing scordatura. Anna says that this guitar was very comfortable and had a powerful sound. She heard this piece for the first time in 1996 performed by Roland Dyens himself in her native Poland. She was absolutely astonished by Dyens’ sensitivity, humor, sound and the variety of extended guitar techniques in his playing. After many years when she found a score of this piece, she included this swinging composition with a walking bass in her repertoire. The original lyrics of this song tell a story of a stormy romance which took place on the “Isle of Ferns” (Ile de Ré). The next piece, “Le Départ” Op. 31 by Napoléon Coste, Anna performed on a 2017 Richard Reynoso SP/IN, which impressed Anna with its noble and projective sound, as well as great responsiveness. Anna heard “Le Départ” for the first time in 2013 performed by Anielo Desiderio at GITAROMANIA, a guitar festival in Poland originally founded by her brother Łukasz and now continued by Anna. Anna told us that “Una Limosna Por El Amor De Dios” is her personal challenge of the recent months. Anna says “…I’ve never felt as a master of tremolo, hence I thought that now is the best time to take a closer look at this technique and try to work on it…” For this piece, Anna picked a 2020 Jochen Röthel CD/CO that was the very suitable for this composition.

Currently Anna is working on a new album together with Carl which will be dedicated to music for the guitar and piano, featuring folk inspired pieces by composers such as Marek Pasieczny, Lars Bisgaard, Venus Rey Jr as well as traditional Chinese songs. Anna has met many new wonderful people in Vancouver and she looks forward to collaborating with many musicians across Americas in the near future after the COVID-19 pandemic.