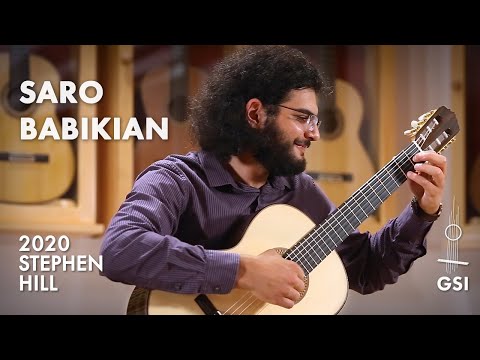 Saro Babikian’s story is unique and shaped by many obstacles that he had to face in life. Saro grew up in Syria where he was exposed to harsh realities that many of us could only imagine. He is our good friend, and on the occasion of his most recent visit and recording session at GSI, we’d like to tell you more about him, his life and the journey that led him to living in the United States.

Saro was born in 1995 in Damascus, Syria in an Armenian family. Saro describes his teenage years in Damascus as living in a melting-pot. He has always been exposed to multiple cultures and traditions. He spoke Arabic at school and while being at home he spoke Armenian to his family.

Saro was exposed to many harsh situations while growing up that forced him to grow up very quickly. When he was only 7 years old, his mother was diagnosed with cancer and she moved together with Saro’s older brothers to the United States with the hope of finding a proper treatment. When the family was separated by distance, Saro still lived in Syria together with his father and his grandmother.

There are no other professional musicians among Saro’s immediate family. His mother played the piano as an amateur, and together with Saro’s father, she always made sure that their children had access to cultural and artistic opportunities. They listened to classical music instead of pop and were well-familiar with the greatest Armenian composers such as Komitas and Aram Khachaturian. In 2005, as the first member of his family, Saro started taking music lessons at the local conservatory in Damascus where he studied classical guitar. Doing music and playing the guitar turned out to be crucial for Saro to help deal with the harshness connected with his mother’s illness and the family being divided between two distant places across the world.

In addition to growing up in a divided household, in 2011 the Syrian Civil War began. Saro lived in Damascus which was relatively safe according to Saro but there was a constant fear of bombings:

“It was safe in Damascus, the capital where I lived, in terms of there were no actual street fights or anything like that. But there were constant bombings happening. It was a little risky staying there and living everyday life. Going outside, you never know where a bomb would come from. But it wasn’t a battlefield yet in Damascus when I was there.”

The first months in the United States were hard. Even though Saro knew the language, he had problems with more difficult conversations, especially during his high school years. It was also not easy for Saro to leave his lifestyle and his friends behind. In addition, the health of Saro’s mother continued to worsen. In 2013, Saro started preparing to start his higher education. He had no doubt that he wanted to pursue the classical guitar. As Saro says, the guitar “saved” him during the most difficult times.

especially during his high school years. It was also not easy for Saro to leave his lifestyle and friends behind

In 2014, Saro’s mother passed away. Her wish was for her son to pursue his dream of studying music. One year later, Saro was admitted to pursue his bachelor’s degree at the prestigious USC Thornton School of Music where he studied with Scott Tennant, William Kanengiser and Brian Head. Saro spent five years at USC and graduated from this university with both bachelor’s and master’s degrees.

Since moving to the United States, Saro has already been invited to perform at the famous Carnegie Hall in New York.

Saro says that his experience of studying at USC has made him a far better musician in terms of skills, technique, and musicality. What helped him the most were the opportunities that he didn’t have in Syria. According to Saro, the country didn’t have enough resources, especially for solo instruments, such as Classical Guitar. While studying at USC, Saro observed many improvements in his playing. Nowadays, Saro is leading a successful guitar studio with thirty students. He shares his love of classical guitar and makes sure that his students are having all of the opportunities that he missed when he started his classical guitar journey.