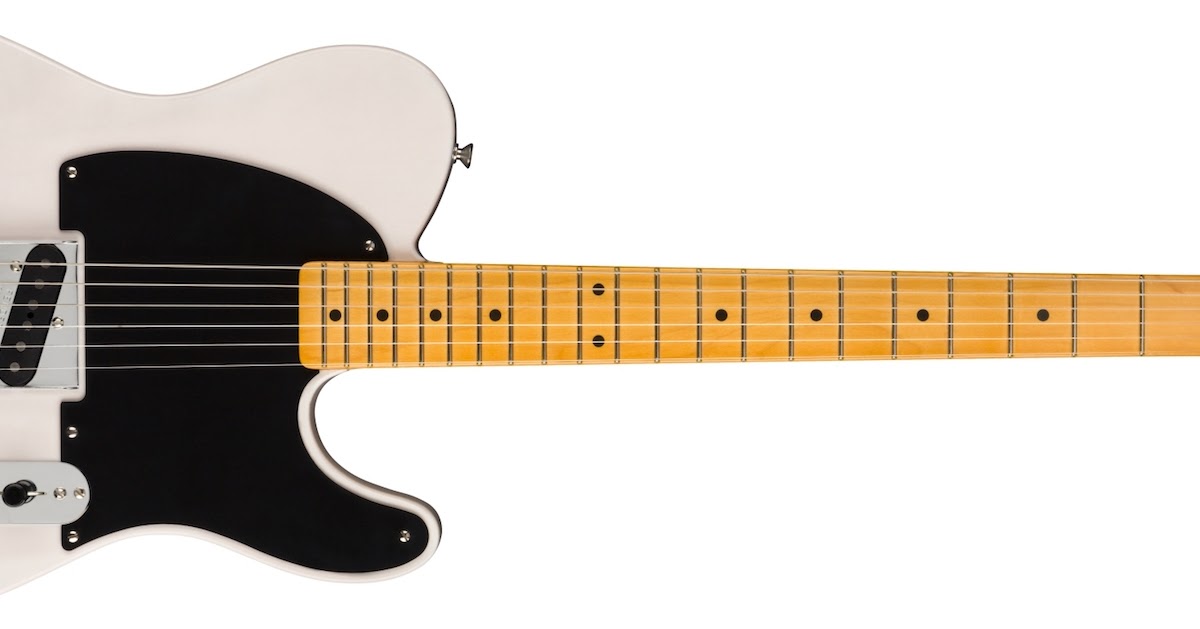 Aw, dang! This Tele here is a celebration of 70 worthy years. A precise, more respectable reference to this particular model would be an Esquire instead of Telecaster because that’s what Leo called it back then. I’m appraising this model on two accounts: 1) Is it worth the nostalgia? 2) Is it an over-priced novelty? So here goes…

After some extended personal time with this guitar, I must say that it’s the true definition of an NOS. This is what you would get if you travel back in time to buy a fresh Esquire from the store. Everything here is true to form, I couldn’t find anything to nitpick so it’s a worthy time-traveler. However, be informed that the body is a roasted pine version, the original would have been an uncured pine. This explains why it’s a super light guitar & we know that pine per se isn’t a hefty wood to begin with. The entire instrument is nitro finished, neck & fretboard included. Look forward to some gracious ageing with this one; that relic look would be at your disposal over time. You can now avoid feeling duped paying for an abused guitar. How it’s aged, it’s your call. Oh, those slot head screws are a fine touch & a deserving throw-back – top marks, Fender! One fine rehash with some extras to boot.

This isn’t a modern Fender, it’s a repro of a historical landmark so the neck carve departed from that contemporary, shallow profile. It’s a beefy U-type but it’s not as bulky as the Japanese Offset Telecaster. If you are an ardent grabber of necks, this one would please you. As the neck is all glossed out, be assured that it is not an overwhelming overcoat so handling this guitar over prolonged period of play is a pleasant experience indeed. If it could appease a gloss neck heretic like me, then Fender did it right. As mentioned in the preceding paragraph, the roasted pine body is a light darling. The unplugged resonance here is, to say the least, above average. Thank you, Fender for keeping the action adjustment screws in check, no palm-stabbing experience here either, it’s a very comfortable guitar to play.

I’m still overwhelmed by the goodness of a lone pickup coupled with a three way switching / selector option. To begin with, this is a Tim Shaw designed pickup so nothing detestable could be heard from any of the selections. If you wish for a normal tone experience, notch the selector in its middle position, the volume & tone knob works like any other ordinary Tele. Flick it towards the bridge, the tone knob is bypassed & one could hear a very raw, in-your-face Tele tone; the best I’ve come across thusfar. In this option, the pickup is at its brightest. Flick the selector neck-wards, the circuit now employs another capacitor wired especially to the volume pot & you have a very rounded top end; fat but not muddy. I actually enjoyed all three variations as these open up the tonal palette from spanky cleans to crunchy blues to – dare I say it – metal-esque lead voicings. If you think this is a one trick pony, then you are dismissive of what that 3-way selector does for the instrument even before hearing it in action.

As promised, on accounts of both queries: 1) This is one heck of a re-intro by Fender. I was skeptical at first but after hearing it in action, it’s a beast! The guitar remains objective & thankfully, it wasn’t revised to reflect the times. Ok, the roasted spruce is as contemporary as it gets but it didn’t get in the way of good nostalgia 2) Value-for-money considerations – it’s worth every cent. The price is definitely befitting of its class. Some would argue that it doesn’t feel like a $2.9K guitar & that’s because we often link a hefty price tag to present day luxury; double locking whammy bridges, active circuitry, multi-ply bindings, exotic tops, etc. This guitar should be valued for its goodness, the QC & tone are enough considerations for the money – yes, it’s that worthy. If there is any aversion for this instrument, then from a personal perspective & I’m really nitpicking here, the slot head screws inclusion were excessive. If you’ve dealt enough with them, the screwdriver has a tendency to slip because slot heads do not promote grip. Then again, this Esquire is so good, no screw drivers should come near it. So that concludes my very happy encounter parting with this much hard earned money for an OTT Esquire. No regrets.

Too many slot head screws in a single guitar

What should you learn first – BASS or GUITAR? | Andriy Vasylenko