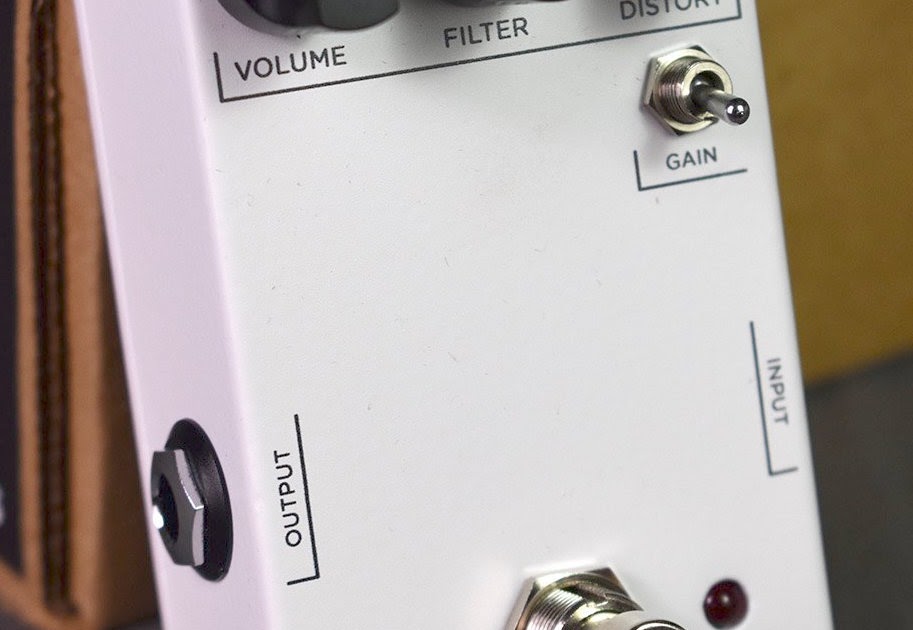 The JHS 3 Series Distortion is the manufacturer’s most affordable line of effects pedals. They are no-frills in design – hence the all-white, graphic-free affair for all pedals across this series – and feature a trio of knobs – hence the name.

As with most of the JHS pedals in this format, it is constructed from tough grade aluminium with a removeable baseplate via a 4-screw access. The white coating was done well with no traces of blemishes, ditto the labels. The plastic knobs are also a non-flimsy affair & what I like about them is the that they promote easy handling owing to the flat surfaces that are easy on the fingers. The only feeble feature here is that mini gain mode toggle switch. This is a little tricky to handle especially during live situations & the fact that it’s located below a control knob doesn’t help much. Baseplate removal reveals a non-battery clip feature; meaning, you need to power this using a PSU exclusively. Also, on days when your talent & ideas get you nowhere, reading this message on the board is rather encouraging (please click for a larger rendition):

Alright, this is where you regret /  delight spending good money trusting the JHS brand name despite its budget offering. Despite the self-explanatory labels, I find them a little misleading after hearing the pedal in action. The VOLUME control gives you command over how loud / quiet this pedal should be but it also influences distortion intensity generously. It is definitely a good thing for those in need of raging distortion with different musical applications but it’s also a nuisance because in your effort to be louder, you are dialling in more distortion which you don’t want to happen because you believe the DISTORT feature would do just that. On the note of distortion, the aforementioned DISTORT control, to me, is really a clipping control (Disclaimer: No idea if this is possible via a variable resistor). At lower levels, you would hear an overdriven response which intensifies as you turn the knob clockwise. It then moves into distortion territory & finally a fuzzy affair at about 1 o’clock onwards. This is a bonus – having three clipping types in a single offering – but it’s biased towards the fuzz. About 25% leeway is accorded to drive & distortion each but a 50% consideration for the fuzz. The FILTER function is a typical tone control with more pronounced brightness as one passes the midway point turning it clockwise. Last but not least, the GAIN toggle. Down flick, it adds a good serving of fatness, the rest of us refers to this as compression. Up flick, a brighter top end which we typically understand as presence.

Despite being a simple affair, the pedal caters to many performance applications. It’s a superb clean boost, a crunchy blues injector, a rock distortion reference & some crazy fuzz-out psychedelia could be had from this one pedal. It all depends on how you set it up to be. Also, I’ve managed to stack this up with other drive pedals & it thrives on a clean boost plugged in after itself. It’s rather impractical with an intense drive counterpart or if you dial your amp’s dirt up too much; it will go into undefined fuzz territory.

This is a good pedal to own & labelling it as a DISTORTION unit exclusively is rather inaccurate. I enjoyed the features on board despite the scant offerings & it’s definitely worth the $149 (local currency) asking price. That tiny GAIN toggle switch remains to be bothersome; switching it during a performance might get you into some difficulties but I guess many of us would have set our preferences prior to kicking it into action. Lastly, the white finish gets dirty easily but we are in this for the tones, yes?

Ask the Expert: What’s the Deal with Nylon Guitar Strings?

If I learn Acoustic Can I Play Electric? Tips To Move From Acoustic to Electric

How To Slap Bass For Beginners (COMPLETE Walkthrough!)