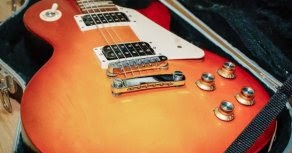 I dealt on behalf of someone yesterday. I don’t usually do this but for certain individuals, it’s an exception out of goodwill. The person was interested in this guitar, it’s a Gibson LP Tribute in honeyburst finish.

So I braved the downpour during lunch time yesterday to finalize this deal. I requested a final inspection before agreeing to pay because the owner did not fully disclose the condition of this instrument which to me is crucial. The agreed price is based on the condition of the item. If it falls below a certain standard then the buying individual has the right to reject or re-negotiate the terms which is usually the asking price. Example –  A offered to sell B a pencil. When they met to finalize the deal, B realized that A is selling a broken pencil. Since the pencil is a limited edition item, B was still interested to buy but offered A a reduced price in view of the item’s condition. A agreed since he did not fully disclose the pencil’s condition to B & that the new revised price reflected the true value of the pencil under B’s evaluation. B highlighted another similar pencil in the market which is of identical make but not broken, going for lesser than A’s initial offering. Both parties closed the deal & they lived happily ever after.

When the guitar in question was inspected, it revealed some worn areas (revealing bare wood) behind the headstock & body’s rear edges. These details were not disclosed in the seller’s ad for sale. I talked to him to reconsider his asking price in view of this discovery; that’s how much respect I accorded to him instead of dictating my own price which might be well below the seller’s liking. In lay person’s term, it might be low-balling him.

He tried to school me in on the guitar being ‘limited edition’ & ‘discontinued’ making it rare. The worn out areas were at the rear of the instrument anyway & beyond visual scrutiny. These don’t affect the tone, that’s more important according to him. I told him the Tribute models are not discontinued, they are still in production under Gibson’s Modern collection. Satin finishes are more prone to wear at certain parts of the body which is normal (parts rubbed against the strap / player’s body / bag / etc) but the extent of the wear will affect the instrument’s value. I told him the crux of the matter was disclosure; if he had done this in the ad, I would have given the instrument a pass as it’s not worth the $900 asking price. So he revised it to $880 & I politely walked away.

So folks, if you are selling stuff, make efforts to disclose details. If you do not wish to do so openly, provide avenues for private discussions. These must take place before any payment agreement to prevent the technicalities of contract law from manifesting complications & dispute. We do not know one another to begin with so why end off in animosity, yes?

What should you learn first – BASS or GUITAR? | Andriy Vasylenko