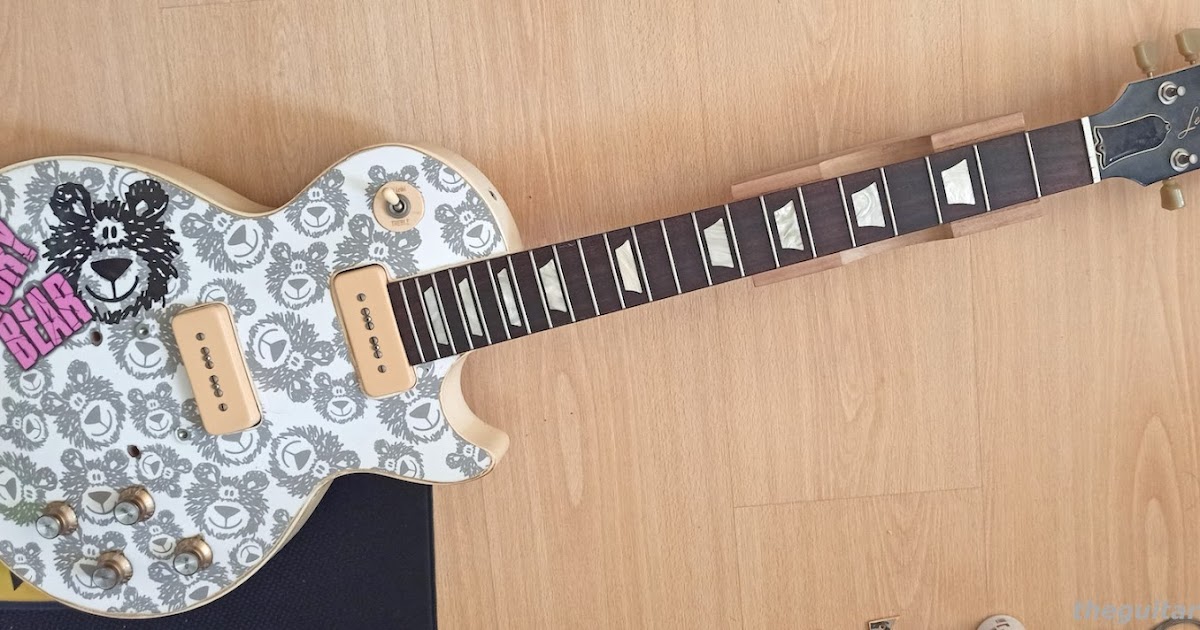 I was in the market for a P90 equipped Les Paul & I wasn’t willing to invest in a spanking new guitar, it’s just not the right time to do so (read – economic downturn). I chanced upon this one in the after-market. It’s covered with that custom graphic & it’s not exactly enticing. The former owner cited a preventive measure for doing so; he knew the white finish would cream off so this is a way to mask that out. By the way, this is a 2011 Les Paul Studio ’60s Tribute.

The custom graphic was easy to remove. It’s an industrial strength sticker so it came off in one piece & did not leave any torn bits on the instrument’s body. What it left behind were patches of adhesive.

It’s no use fighting industrial stains with regular guitar polish, even the fabled WD40 didn’t prove to be effective. I have this adhesive remover for an art project not too long ago & it was the answer to fighting stubborn stickiness; imagine stepping on chewing gum & being at your wit’s end in trying to get it off. OK… the Millenials & Gen Zs here might not know what chewing gum is.

I hope this is a better picture of what I’m fighting with. Many scrubs & more than an hour later, those stains were off. It covered about 2/3 of the body surface so it’s not an easy feat. A non-abrasive scouring pad (the exact one featured here: CLICK) was used & I won’t recommend doing this if you are dealing with the same problem on a gloss finished body. It will definitely scratch the surface. This Studio Tribute sports a satin finish, while being very susceptible to knocks, it proved to be more tolerant to scouring.

Learning the Nuts and Bolts of Blues Slide Guitar

How to EQ Bass to Sit Perfectly in the Mix